YERBA MATE VS COFFEE – Does Yerba mate have caffeine?

Comparison on Yerba mate vs. coffee is becoming more and more widespread debate among drinkers of these two energizing drinks. No one on the planet doesn’t know about coffee. Many people consume this beverage every morning so that the caffeine can help them shake off the grogginess they often experience after waking up.

All over the world, there are little shops dedicated to the sale of coffee drinks in many forms. People gather in coffee shops just to enjoy this wonderful beverage. From sugary flavored lattes to large iced drinks, it’s safe to say that coffee has become a cultural phenomenon. Worldwide popularity and consumption are way on the side of the coffee. Yerba mate as Coffee’s rival is much less recognized, but it has some health benefits that coffee doesn’t.

HERE IS A PERFECT YERBA MATE ALTERNATIVE TO COFFEE

Organic dark roasted loose-leaf Yerba mate is a great for use with coffee maschines, French presses, strainers or gourds. It has a delicious full bodied flavor of a roasted grain beverage.

And the most important thing: It has benefits of fresh green Yerba mate – aids in mental facilities, stimulates the nervous system, has a variety of nutrients. You can read much more about it at OrganicMate.net.

People love that they can drink something that has health benefits and that provides them with the energy they need to power through the day. However, it’s important for people to know that coffee isn’t the only caffeine-rich drink out there. In South America, the yerba mate herb has been providing health and energy benefits for many years to those who cultivate, process and drink it. Yerba mate is, in many ways, considered coffee’s rival. Read on to learn a bit more about what yerba mate caffeine content is and how it compares to coffee. 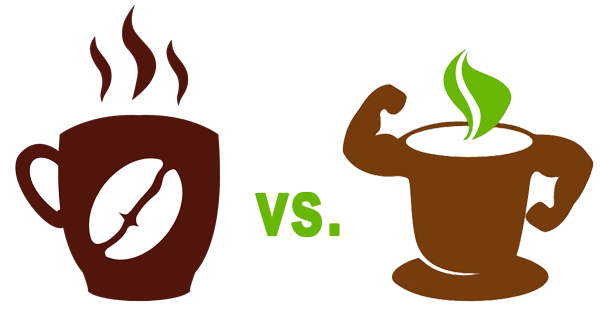 Coffe vs. Yerba mate is a widespread debate among enthusiasts of these two drinks.

How does Yerba Mate Caffeine Stack Up Against Coffees Caffeine?

Yerba mate and coffee are both known for being energy-boosting drinks with a number of health benefits. Because of these similarities, there have been many comparisons made between the two. Below is a summary of the findings in Yerba mate versus coffee discussions:

1. Does Yerba mate have caffeine?

2. Coffee has been shown to stimulate both brain and muscle function, but its nutrient content does not surpass that of yerba mate.

3. Coffee’s acidity can irritate the digestive system, cause a rise in the symptoms of digestive disorders, and cause acid reflux and heartburn. Yerba mate has never been shown to have this unfortunate effect. 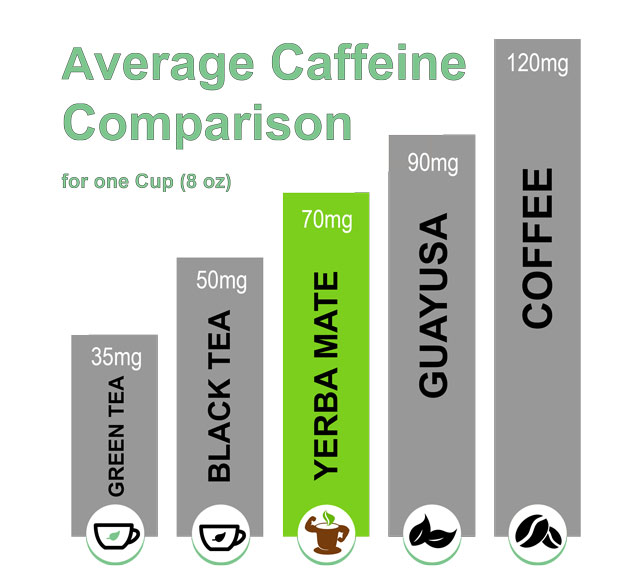 How is Yerba Mate Beneficial?

By now it should be clear that the yerba mate herb contains a lot of life-giving compounds. However, it is important to know how these compounds can affect the body in positive ways. For those still asking the question is yerba mate good for you, here is a rundown of some of the practical benefits that people have experienced from drinking yerba mate:

1. Because it contains caffeine as well as a host of other nutrients, yerba mate has been shown to stimulate both the body and the mind, providing a great deal of energy and promoting alertness throughout the day.

2. This herb is also anti-inflammatory, which means it can help to keep a number of negative health conditions at bay, including high blood pressure, diabetes, and even obesity.

In the past, I couldn’t imagine my morning without a cup of coffee. Lattes, Turkish coffee, espresso… you name it! I still love coffee, but my body is rejecting it. It is too acid and makes me jittery. I’m so happy that I discovered Yerba mate. At first, I wondered if does Yerba mate have caffeine. It was energizing drink without any jitters. Yes, It has and even less.

No more milk and sugar, just super healthy mate in the morning for me. I like to experiment with different Yerba mate recipes. I wish that more coffee shops and tea houses would sell mate to go.

It is critical to me that Yerba mate caffeine does not make me jittery. In my opinion, when it comes to the debate about Yerba mate or coffee I prefer the Mate because of its health properties.

3. Yerba mate has an antioxidant level that remains unmatched by any other herb or drink. These antioxidants are important because they help to neutralize and destroy free-radicals, which are known to cause premature aging and contribute to the development of a number of diseases.

4. Mate leaves can be used as a natural laxative. With moderate consumption, the drink can help keep the digestive system flowing as it should.

5. Yerba mate is believed to be adaptogenic, which means that its high saponin and chlorogenic acid content can work to fight disease and restore the entire body to total health and wellness.

Despite the fact that very official data exists on the effects of yerba mate, the age-old stories, and the anecdotal evidence speaks for itself. While coffee can be beneficial when consumed in moderation, it will never be able to match the nutrient profile and health benefits offered by even one well-prepared cup of Yerba mate.

There are some things that people need to be aware of before consuming yerba mate drinks:

1. The caffeine in yerba mate has been shown to have a different effect on the body than the caffeine contained in coffee, but those who have a hypersensitivity to caffeine should still avoid consuming yerba mate.

2. There is still very little scientific research on the long-term benefits of drinking yerba mate. It is important that each individual continues to monitor their health and discuss any concerns with their chosen health professional.

But, the vast majority of Yerba mate consumers are enthusiastic about it. In many cities, some communities appreciate Yerba mate and are raising awareness of this exceptional drink. Once you try it and you start to feel its benefits you never go back to coffee or other energy drinks. Yerba mate will increase your well-being. We hope this article on Yerba mate vs. coffee will convince you to try mate tea. You will not regret it.